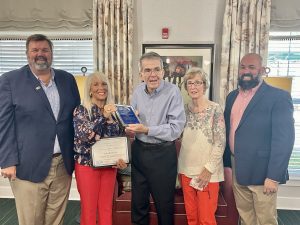 John’s dedication included serving as President of the association from 2016-2018. Prior to that, he served in a number of Board positions, including Region Vice President, District President and as Chair of several member committees. John also served as a Nursing Home Preceptor in which he mentored Administrators in Training and helped young professionals grow in their long term care career. He was also known for his tremendous advocacy, regularly visiting with lawmakers, hosting facility tours and traveling to Tallahassee during the legislative session to educate policymakers about the issues impacting long term care providers in Florida.

“We’re pleased to honor John as a lifetime member on behalf of the more than 650 care centers and thousands of caregivers and residents we represent. He has left a lasting impression on the association and the long term care profession, and we are extremely grateful for the contributions he has made over the years,” said Anita Faulmann, FHCA President.

CEO Emmett Reed also recalled John’s role in helping to establish the association’s Education & Training Center, a 6,000 square foot indoor/outdoor meeting space that FHCA uses for various internal and community events. “John played a significant role in getting this project off the ground,” said Reed. “Today the training center is used by members, local associations, nonprofit groups, legislators and others and is a well-recognized space in Tallahassee’s downtown community.”

Honorary Lifetime Membership in FHCA is a distinctive honor reserved for those individuals who have a long-standing history of outstanding service to the association. FHCA’s Board of Directors vote to award individuals with this distinction in recognition of their many years of leadership, service and support. 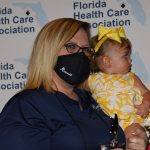 Kim is actively involved in FHCA’s legislative initiatives, coming to Tallahassee often to testify before the Legislature, participating in facility tours and engaging in important meetings to give lawmakers a better understanding of the profession, its challenges and the quality care that residents receive. 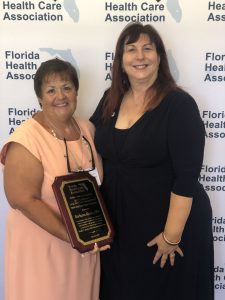 For 7 years, Klein has been serving in numerous capacities at the Douglas T. Jacobson State Veterans Nursing Home, located in Port Charlotte. In recent years, she championed the integration of the home’s electronic medication and administration record and scheduling (EMARS). Klein spent countless hours training the nursing staff on all shifts to use the program, which has resulted in improved fiscal accountability and enhanced resident care. Her tireless work at the home has led to deficiency free surveys for the last two years. Klein has also helped with improving outcomes within the therapy department, with residents seeing their mobility increasing thanks to her advocacy for additional equipment that would enhance their activities of daily living.

“Barbara is a model employee whose meticulous work ethic, positive outlook and demeanor make her an inspiration to work with,” said Kelly Cline who works alongside Barbara at Douglas T. Jacobson State Veterans Nursing Home, “She is a true team player with only one goal, superior services for our veterans. She has an unsurpassed passion for our residents; her efforts help maintain our residents’ dignity and respect.”

Emmett Reed, executive director of FHCA said, “Florida Health Care Association is honored to recognize Ms. Klein for the dedication and passion she has for the residents under her care. She is a true role model for other long term care nursing professionals.”

FHCA’s Long Term Care Rising Star in Nursing Award recognizes nurses who have worked at an FHCA member center or the corporate level for five-to-ten years. Award recipients are chosen for demonstrating a positive impact in clinical practice and a commitment to person-centered care. The award is one of several of FHCA’s Excellence in Long Term Care Nursing Awards given annually at the association’s Nurse Leadership Program.  Honorees reflect the dedication, professionalism, and expanded skill sets of the long term care nursing profession. The annual FHCA awards recognize individuals for their important roles in helping centers achieve continuous quality improvement by improving their national Quality Measures and demonstrating a person-centered care approach to residents and patients. 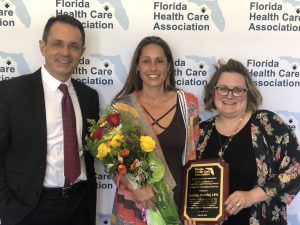 Lorinda “Lori” Wendel of Parkside Health and Rehabilitation Center in DeLand was recognized as the Florida Health Care Association’s (FHCA) 2019 Licensed Practical Nurse of the Year. Wendel has been a nurse for two decades and brings a dedicated work ethic as the LPN Unit Manager at Parkside, where she has spent 6 years serving in instrumental roles ranging from wound care to charge nurse to direct care and unit manager. The award was presented during FHCA’s 2019 Excellence in Long Term Care Nursing Awards presentation held in St. Pete Beach.

Wendel is notably proactive; often stepping in to assist with admissions, medication distribution, at the front desk, and with staff orientation or monthly in-services. Wendel has impacted Parkside by reducing the center’s re-hospitalizations to just over 1% through the use of clinical pathways, safety nets, and treating residents in place. She has also helped improve resident outcomes with a patient-centered approach to care, reducing falls and lowering resident antipsychotic medication usage by 15%.

“From the moment she interviewed with our center, we knew she was special,” said Heather Jackson, Parkside administrator. “She has enriched the lives of our residents and improved our center’s outcomes since becoming a part of our team.”

“It’s clear Ms. Wendel goes above and beyond in her field, and Florida Health Care Association is proud to recognize her for all she does to improve the care of the residents at Parkside,” said Emmett Reed, executive director of FHCA. 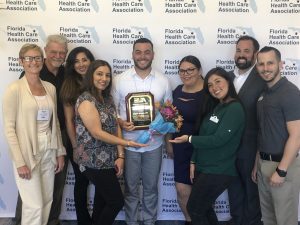 Rivera, who has been a registered nurse for three years, draws his inspiration for care and compassion for his residents from his mother, who also worked as a nurse. Rivera began his career as a nurse in Puerto Rico and moved to Conway Lakes shortly thereafter, where he was quickly promoted to RN Unit Manager over the Rehab Unit due to his drive for constant improvement. Rivera excels in his field due to his caring attitude, exceptional work ethic, and his ability to personify the center’s mission. Rivera is known for his sense of humor and an infamous med-pass split which results in a fun and positive environment for both residents and staff at Conway Lakes.

Administrator Josh Wagoner said, “David possesses an effervescent personality and brightens the day of [those] he comes in contact with. His gregarious nature and sense of humor reflect in the interactions between David and those in his care… [He] always acts with compassion and is frequently seen going out of his way for his patients… his empathetic disposition makes him receptive to needs of patients and ensures they are fulfilled.”

“Mr. Rivera is an inspiration to other caregivers in the long term care profession, and we’re proud to honor him for going above and beyond to enhance his resident’s care and quality of life,” said Emmett Reed, executive director of FHCA.