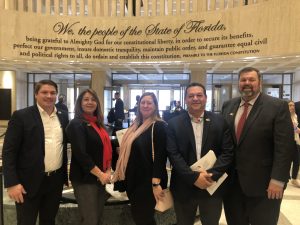 I recently watched the end of the American Football Conference championship game, with the Kansas City Chiefs just a few minutes from securing a spot in Super Bowl LIV. I could see the jubilation and joyous celebrations taking place as the camera panned to the sidelines. The looks on the players’ faces varied from tears of joy, ear-to-ear smiles and resolute “we did it” chest thumping celebrations as they realized they’d just earned a trip to Miami for the biggest game of the season.

A few hours later, I watched the same celebrations as the San Francisco 49ers became the National Football Conference champions and earned their place in the Super Bowl. Despite also being the final minutes of the game, I decided to watch the celebration of the players hoisting the division trophy as confetti filled the air.

With the exception of Florida State football, I stopped regularly watching sports many years ago. Instead I find myself waiting to tune in until the pinnacle events are taking place. For the NFL, for example, I start paying attention during the playoffs and then invest fully during the Super Bowl, if only for the parties!  I try not to miss the final rounds of the Masters, British and U.S. Opens in golf and the World Series in baseball. For tennis, it’s the finals of Wimbledon, especially when any Williams sister is playing. You get the idea.

In each of these instances, I enjoy watching the contest until the end, and then I keep watching through the crowning of the champion ceremony. Why?

For me, there is something gratifying and special about seeing professionals reach the apex of their career and achieving their goals. I will even admit to tearing up a little bit listening to the heartfelt speeches given from the winner’s podium. It just feels so good to see people succeed.

January marks the beginning of a pinnacle event for FHCA with the start of the 2020 legislative session. Our internal team and our members have been training all year for this 60-day sprint that can often feel like a marathon. But we have put in the work to prepare for this race.

For the past eight months, FHCA members have hosted many legislators on tours at their care centers. FHCA and Our Florida Promise have held numerous legislator meetings, and our respective boards have worked together on a legislative strategy to help boost funding while offering common sense approaches.

We have implemented, and continue to implement, a comprehensive public relations strategy to get our message out to the markets that can make a positive difference.

But this is not the Super Bowl or the World Series. Dare I say the stakes are much higher?

Over the next 60 days, we hope the Florida Legislature emerges with a funding plan that properly funds nursing centers and does so in a recurring manner.

If that happens, there will be no trophies, no heartfelt speeches.

What there will be is more funding so nursing centers can compete for the best staff possible. It will also mean a level of predictability in budget planning for years to come. Most importantly, it will mean additional resources to care for Florida’s frailest elders. Grandparents, parents, aunts, uncles, sisters, brothers, friends and yes, even children.

And that my friends, is enough to bring more than a tear to my eye.