FHCA made several special recognitions during the 2019 Annual Conference, honoring members whose servant leadership has made a tremendous impact on veterans, residents, the Association and the long term care profession.

“We’re honored to recognize these two special individuals who have dedicated their lives to serving others,” said Emmett Reed, FHCA Executive Director. 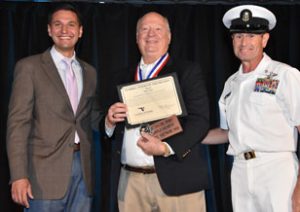 Fred Taylor, licensed nursing home administrator and FHCA Florida Leader, was honored for his service to veterans across the country. Florida Department of Veterans Affairs Executive Director Daniel Burgess (left) and FHCA Chief Lobbyist and retired U.S. Navy Senior Chief Bob Asztalos (right) presented Fred with a replica of the brick that bears his name that is laid within the Walk of Honor in the Florida Capitol Courtyard in Tallahassee. As Chair of the Florida Veterans Foundation, Asztalos also presented Fred with a medal on behalf of the Florida Veterans Foundation for his military and post-military service.

A tremendous advocate for veterans, Fred is retired U.S. Army and served in the Republic of Vietnam with the 1st Cavalry Division. He was awarded the Purple Heart for combat wounds on three occasions. Fred’s list of accomplishments include being the United State’s delegate to the World Veterans’ Federation which met in Paris, France in 2000. That same year Fred was elected National Commander of the Purple Heart organization. He was recognized in 2007 by the Postmaster General, John Potter, for his work to establish the Purple Heart Stamp. In 2009, the National Infantry Association presented Fred with the Order of Saint Maurice Medallion for his lifetime achievements on behalf of veterans. 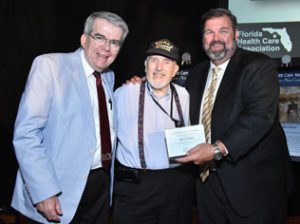 Andrew (Andy) McKillop, former administrator at Okeechobee Health Care Center, was recognized with an Honorary Lifetime Membership in the Florida Health Care Association. Andy has worked in long term care and played an active role with FHCA for more than 50 years. As an administrator, Andy McKillop was best known for walking the halls of his facility to engage his residents, their family members and his staff each day. He is a strong resident advocate and always told his staff to “treat the residents as if you were a resident and be the kind of caregiver that you would want to care for you.”

Andy always had a strong commitment to quality, which is evident by the recognitions that were achieved under his leadership – the Governor’s Gold Seal Award, National Quality Awards and a CMS Five Star rating.

Andy served for a number of years as FHCA’s District XIII president, he was a district officer and a member of FHCA’s Board of Directors.  He has also served on several committees, been actively involved with emergency preparedness and was a member of the Long Term Care Reform Task Force which developed the recommendations that helped shape Florida’s Medicaid managed care system.