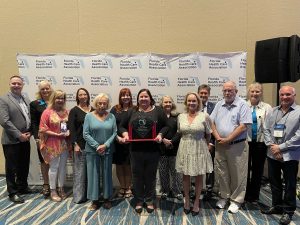 At the Florida Health Care Association’s Annual Conference in Orlando, Patti Spears, administrator of Suwannee Health and Rehabilitation Center, was recognized for her commitment to the FHCA with the Walter M. Johnson, Jr. Circle of Excellence Award.

The award is the highest honor given by FHCA to recognize leadership and commitment to the organization. Like the award’s namesake, Spears has served in numerous voluntary leadership positions and has been instrumental to the organization with her active voice on behalf of residents and caregivers with the Florida Legislature.

“Patti has always been known for her passion for the profession and genuine love and caring for her residents and team members,” said Emmett Reed, FHCA Chief Executive Officer. “She has been a tremendous advocate in the face some of our association’s greatest challenges, and we continue on a path to success thanks to people like her.”

Spears began her career as a social worker, and after earning her nursing home administrator’s license, used that passion for caring and leadership to springboard her active involvement with FHCA. Spears has served as an FHCA District President, member of the Board of Directors and is a graduate of FHCA’s Florida Leaders program. While Chair of the Legislative Committee, she was known for her tireless advocacy on behalf of her residents and fellow caregivers, always willing to visit with and testify before the Legislature to ensure the voices of long term care were heard.

Spears is also dedicated to exceptional care and services for Florida’s seniors and has managed several high-quality centers throughout her career. That dedication and commitment to quality never stopped during COVID, when Spears kept her team in southwest Florida focused on all the necessary infection control protocols while ensuring they followed the operations and systems to ensure residents’ day-to-day care needs were met. The extent of her leadership was demonstrated when the facility earned a deficiency free survey from the Agency for Health Care Administration (AHCA) once the agency resumed its survey process after the height of the pandemic. Spears now brings that same dedication and leadership in her new role as administrator of Suwannee Health and Rehabilitation Center.

The 2021 Walter M. Johnson Circle of Excellence Award is part of Florida Health Care Association’s Long Term Care Achievement Awards which were presented during FHCA’s Annual Conference, July 25-29, at the Rosen Shingle Creek in Orlando. These awards annually honor a Nursing Home and Assisted Living Facility Administrator of the Year, a business partner and other individuals for their service and dedication to long term care. For more information about FHCA’s Long Term Care Achievement Awards, visit the FHCA website.

Kristen Knapp, APR, is FHCA's Senior Director of Strategy and Communications. She can be reached at [email protected]