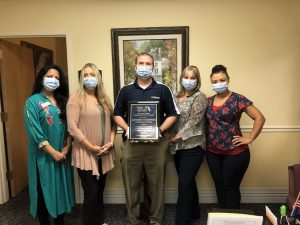 Matt Thompson,  Florida Health Care Association’s (FHCA) Region II Vice President and vice chair of the legislative committee, was honored as the 2020 Arthur H. Harris Government Services Award recipient for his service to long term care. The award, presented during FHCA’s 2020 Virtual Conference, is given annually to an FHCA member who has shown strong dedication to the association’s legislative efforts resulting in positive outcomes for long term care residents and caregivers.

“Matt is an exceptional team member who demonstrates both courage and passion in his dedicated service to FHCA,” said Emmett Reed, FHCA Executive Director. “He provides a valuable voice of reason when it comes to navigating the political landscape on behalf of Florida’s long term care residents.”

Thompson is director of health and financial services at The Manor at Carpenters in Lakeland. As a rising leader in the association, Thompson has increased his involvement with FHCA over the years and is never afraid to put his advocacy into action. A Florida Leader graduate, member of the Florida Center for Assisted Living Committee, Survey and Regulatory Committee and the Legislative Committee, Thompson has used his expertise and passion for nursing center assisted living issues to push for elder care support in Florida politics.

“Matt shows his commitment to long term care in many different ways, and I’m confident that he will continue finding more ways to serve Florida’s older population,” Cliff Bauer, 2019 Art Harris award recipient and vice president of government relations at Miami Jewish Health, said in presenting the award to Thompson. “Whether he’s working as an FHCA district president or stepping up to serve the COVID-19 Long-Term Care Workgroup, Matt is 100% committed to everything he does. He is well-deserving of this recognition.”