A few weeks prior to the opening of the 2019 Florida Legislative Session, FHCA Chief Lobbyist Bob Asztalos sent a memo out to our leadership sounding the alarm of the impending fight to restore funding to nursing centers.

A faithful FHCA member called me shortly after the email was sent and asked me, essentially, if the funding challengers would be as difficult as the email made it appear.

My answer was and still is “yes.

This year’s budget battle will be one for the ages. Not because of anything FHCA has or has not done, but due instead to several major issues outside our control that will make the budget front and center in this year’s legislative session. The issues are as follows:

The ushering in of Florida’s new Governor, Ron DeSantis, also brings new budget priorities. In his newly released budget, the Governor focuses on education and environmental funding as priorities.  His budget includes over $600 million for water programs and over $700 million in increases for education funding. The Governor believes an educated population will attract employers to Florida, thus creating more jobs for Floridians which will increase the tax base. And unless you were hiding under a rock last year, you could not turn on the television or read the newspaper without seeing normally beautiful beaches infected with dead marine life from the red tide, or usually clear water beaches colored dark brown by Lake Okeechobee discharges.  The Governor ran on education and the environment, and his budget reflects those issues.

In his speech on opening day, Speaker Olivia made two comments that should be of concern to FHCA members. He said that his budget for Florida would be less than last year’s budget. He also said that he was targeting the “industrial medical complex,” including the elimination of the Certificate of Need (CON).  A smaller budget means, of course, budget cuts. Will nursing centers be a target?  I do not know, but I do know that a smaller budget makes our restoration of rates ask a much bigger lift.

As for his CON comments, the Speaker has made it clear he does not like CON. Whether or not he considers nursing centers part of the “industrial medical complex” remains to be seen. We will be working hard to explain our position that nursing center CON is different than hospitals, etc.

President Galvano struck a much more moderate tone in his opening day comments and is keeping his cards close to the vest. The Florida Senate is typically the more moderate of the two chambers, and I expect for this year, that will be the case as well. The question is whether the Senate will be able to withstand the pressure if the Governor and Speaker team up to accomplish common goals.

Hurricane Michael costs are estimated to be a staggering $2.7 billion to the state, more than Irma and other recent significant storms. An article ran just the other day showing several dozen people still living in tents in the Florida Panhandle. Take a drive from Tallahassee two hours west and about one hour into the trip you will see the area is still devastated beyond belief.  Thankfully the Florida Legislature has accumulated a reserve for cases such as this.  The problem may be that the reserve is completely wiped out because of Hurricane Michael, and funds from the 2019 budget will be necessary to help with recovery.

If I have you concerned about nursing center funding right now then I have accomplished my goal.  The Governor, President and Speaker are all good leaders. I believe they each have a respect for FHCA and the long term care community. I hope they will do everything that they can to help fund care for nursing centers. I also realize they have many other sectors vying for their attention, which bring me to this conclusion:

YOU MUST GET INVOLVED THIS SESSION!

Nothing is more effective than respectfully and appropriately stating your case before your local Senator, Representative and even the Governor.  They know you and your care centers; they have seen the level of care you provide, but as I said before, there are many other groups asking for assistance. We have to be heard, and they need to hear from you often.

Please do not hesitate to call FHCA and ask how you can get involved in this most difficult battle.

We need your help!

I just returned from a successful trip to Tallahassee, where nearly 40 of my Gulf Coast Health Care team members joined me for our annual FHCA Lobby Wednesday trip. The weather was perfect, with blue skies and a cool breeze enveloping the Rooftop as our team gathered at the FHCA headquarters for our evening briefing. 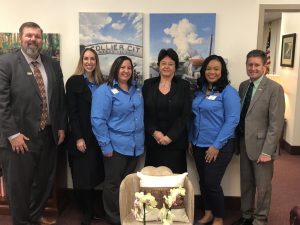 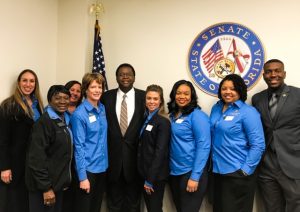 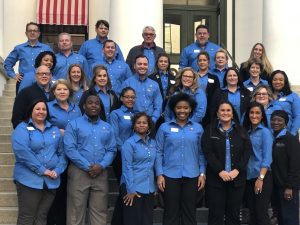 Representatives Rene Plasencia and Tom Leek took time to visit with our team members and offer their insight about the legislative process and why it’s invaluable for the people on the frontlines to come to Tallahassee. We all know this; it’s certainly been said before that our stories are impactful when it comes to helping legislators understand how funding and quality go hand in hand. It never hurts, however, to hear it first hand from the people who are making those decisions.

I’m proud of my team who spent Wednesday meeting with their legislators, visiting with legislative aides and even focusing in on specific lawmakers who are new to the process and need to be better informed. Those who were recently elected don’t know the history about Florida’s staffing standards, the series of Medicaid cuts our profession underwent and the quality strides our centers have made over the last several years. They may not be familiar with the 2014 reforms to our Certificate of Need laws that have resulted in a balanced system that works well to ensure nursing centers are built in the areas where they’re needed most, and what it could mean to our sector should those laws be repealed.

There are a number of Lobby Wednesdays planned for this session, and I am encouraged by how many of our members have signed up to attend. For those of you unable to travel to Tallahassee, you can still make a difference. Right now, we’re asking your help with getting your residents to send letters, sign petitions, make a short video or create posters and take photos that we can use to share with legislators. Legislators listen to the people living in their districts, and the residents in your center can help us tell lawmakers just how important that funding is to their quality care and quality of life. You can learn more and participate in this Resident Grassroots Campaign by clicking here.

We are nearing the halfway point of the 2019 session and there’s still a long road ahead. Thank you for all you’re doing to make a difference!

In October of 2019, the Centers for Medicare and Medicaid Services (CMS) will be implementing the new Medicare payment system, the Patient Driven Payment Model (PDPM). FHCA recognizes this will be the most significant change in Medicare Part A payments since the Skilled Nursing Facility Prospective Payment System (SNF PPS) was first implemented in 1998. PDPM will require all departments within the nursing center to work together to be successful under this change. Although several comments were submitted explaining the importance of a transition for a change of this nature, CMS has decided not to include a transition period. Resource Utilization Groups (RUGs) will end on September 30, and PDPM will start on October 1, 2019.

To help providers prepare for this significant change, FHCA recently completed a series of day-long seminars across the state. Almost 700 members attended across four locations and heard from profession leaders to gain an understanding of the PDPM and learn how to achieve success under the new payment system, including how to lower costs, optimize reimbursement and improve patient outcomes.

FHCA members shared how these seminars were extremely valuable and that they didn’t want to stop there. Starting in March and continuing through the October implementation, FHCA will offer a members-only monthly PDPM Webinar Series to continue informing providers about important topics to ensure a smooth transition.

The webinar series will kick off on Friday, March 29, at 11:00 a.m. EST with Robin Bleier of RB Health Partners, Inc. conducting “PDPM Bootcamp: Basic Training.” This first session will help providers understand the structure and organization of PDPM, with a focus on the rule, the six rate components, and the interdisciplinary role spanning from clinical services, rehab services, coding, billing and more. From there we move into presentations about the importance of Section GG and ADL data for PDPM; strategies for success with workflow changes and training staff; compliance under PDPM; MDS coding and the importance of capturing the documentation that will affect reimbursement; using visual analytics tools to simplify PDPM; and business office knowledge. These webinars will be conducted by FHCA member experts who have spent months preparing for the change and are conducting trainings all over the country on this very important topic. 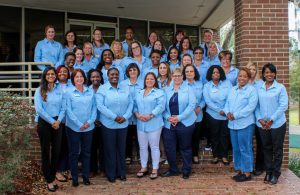 In February, FHCA kicked off its first-ever Executive Nurse Leadership Academy, sponsored by Medline Industries and supported by RB Health Partners, Inc. Attendees from 15 counties met at the FHCA Education and Training Center in Tallahassee, ready to learn, share and make professional connections.

One attendee commented, “Being able to hear how other DONs and centers manage, learning from the speakers, energizes me to return to my center and help grow my future leaders.”

The training yielded other professional and personal benefits. It became clear for some the connection made with their professional peers reinforced their confidence in their ability to lead. One attendee commented they had made “new friends for life” as a result of being a participant.

“It felt fantastic to leave with the assurance that others are working to improve long-term care and they possess the same passion to move health care in the right direction,” said another ENLA attendee.

One highlight from the event was the collective decision by the participants to contribute to the FHCA Education and Training Center funding by donating $1,000 as a group. The inaugural Executive Nurse Leadership Academy class will be recognized with a commemorative plaque as an acknowledgment of their comaraderie and commitment to long term care in Florida.

The kickoff event was just the beginning. During the 15-week program, attendees must complete four instructional webinars, participate in three FHCA Senior Clinicians Council conference calls and provide a brief team building activity to their staff, reporting the participation and outcomes to their center administrator. The Academy will conclude with a graduation ceremony held during FHCA’s Nurse Leadership Program on May 29 in St. Pete Beach.

Applications for the 2020 Executive Nurse Leadership Academy will be accepted beginning June 1, 2019, and will be available via FHCA’s ENLA web page.

Recently we have had a surge of provider requests to review Florida’s staffing requirements.  To review 400.23(3), a minimum weekly average of certified nursing assistant and licensed nursing staffing combined of 3.6 hours of direct care per resident per day.  A reminder a week is defined as Sunday through Saturday.

A review of the staffing minimum in 400.141 includes the following to comply with state minimum-staffing requirements:

For success, we need to evaluate our system of staffing, how it interrelates with our facility assessments, who and how it is coordinated on a daily, weekly, and monthly basis.  Ongoing evaluation of effectiveness is key, and it is encouraged to add this in your monthly risk meeting if not already in place.  Not from a compliance standpoint alone, but rather to determine whether we are meeting the residents’ needs and how we staff to affirm care and services related to acuity.